It is everyone’s dream to live a life full of quality but circumstances (such as low income, unemployment, bad governance, war, inadequate healthcare, quality education, etc) happening around us hinders such dreams.

To live a quality life means to have access to adequate education, healthcare, security, food, press freedom, transport, etc. In addition to this, a quality life should also generate a sense of belonging and hospitality in a community or wherever we find ourselves.

In a survey done by Mercer, an American global human resources and related financial services consulting firm. It highlights the best cities to live a quality life using the following Important criteria:

Vienna,  the Capital of Austria is a metropolis with notable attractions. It is clean and safe, boasting a vibrant cultural scene, comprehensive healthcare, and moderating housing cost.  It offers the best quality of life in the world; a thought you could wish for.

Zurich, permanently settled for over 2000 years is the largest city in Switzerland and the Global centre for banking Finance despite it relatively small population. It has four distinct seasons; Spring, Autumn, Summer and Winter.

A major city in the north of New Zealand’s Island and the most populous city in New Zealand. Auckland spreads over volcanic hills and around twin harbour which is full of superyachts and lined with bars and cafes, contributing a thrilling mix of natural wonders and urban adventures.

The Third Largest City after Berlin and Hamburg in Germany. One of the famous things it is known for is the beer garden (it has over 60 beer garden). It has a low cost of living but the excessive amount deducted for tax can be compromising.

Vancouver, a city in British Columbia, Canada is known for its fresh, local, seafood. Expensive, but it’s been consistently ranked among the city of quality living. Tourism is a major revenue for the city due to its scenic location, a unique destination for tourists.

Dusseldorf is a City located at two confluence Rivers in Germany. It has 22 higher Institutions. The City is famous for its electronic and experimental music. Mercer’s quality of Living ranked Dusseldorf the sixth most livable City.

Frankfurt, another city from Germany which made the list is a global centre for tourism, transportation, culture, education and commerce. It’s also home to influential Educational Institutions and Finance institution such as the Goethe University and European Central Bank.

Copenhagen is the backbone of culture, economy and government centre for Denmark. Which has made it to see a strong Urban and Cultural Development. 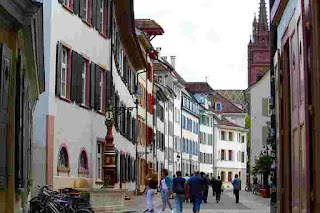 The city which is located at the heart of Tri – a border region of Switzerland has a dynamic economy.  Basel had an unemployment rate of 3.7% in 2016. In 2018 about nineteen percent (19%) of its population are working in the primary sector while 80.6% are working in the secondary sector, an attribute of quality living.

Sydney, made up of 658 suburbs, is the most populous city in Australia. Though it’s been ranked as one of the most expensive cities in the world, it is also among the top cities you can have a quality life. Finance, Tourism and Manufacturing are the backbones of its economy.

However, the cost of living is high but it has a low unemployment rate of six percent (6%) and the gross income is relatively high.

Berlin is the capital and the largest city in Germany both in Land size and population. It is a World-renowned centre for media, politics and economy.

Bern, a city in Germany in which thirty-four percent (34%) of the population are foreign Nationals with a population of about 144,000 as of 2020.

Wellington is another city from New Zealand which is also part of the best cities in quality living. It is the capital of New Zealand though not defined in legislation but convention. Tourism, film, art and culture, ICT has been the backbone of its economy in recent years.

As of 2013,  the largest employment industries for Wellington residents were professional, scientific and technical services, public administration and safety, health care and social assistance, education and training.

It is interesting to note that, no City from these three continents made it to the top fifteen (15); Asia, South America, Africa for quality living.

However, this is just research of an organization as there are much research done by different organizations and individuals you can look up to and this does not neglect the fact of carrying out your own research.